There are many ways to take action before the destructive processes that generate industrialization on the planet and the consequences this brings chain, in our own lives and those of future generations

We all know now that the plastic volumes open sea are an impressive dimension damage sea temperatures, direct contamination to fish and other living beings that inhabit it, their habitat disastrous consequences.

We also found other forms of pollution that humans are not receiving engrossed in our daily lives and with their own concerns, not realizing that these likewise are of the same type and priority, if not more, as the huge amounts of uneaten food and that waste ending in landfills, which could be aimed at low-income people long before decomposition and “due date” that is. And they consume in its cultivation and processing among others, water, fertilizer, man hours, fuel, equipment and machinery in use emit greenhouse gases, and energy …

Now, what can we do to remedy this? what actions we should take as modes, custom and / or culture so that the effects are minor and these changes do not follow an ever increasing damage global warming and harmful effect on the environment?

We believe that we can begin to educate ourselves and teach our children the best use of the resources provided by nature, control of water consumption for example also buy what is to be consumed without waste and / or dribble, prefer to use natural and their packaging are recyclable products, among others. 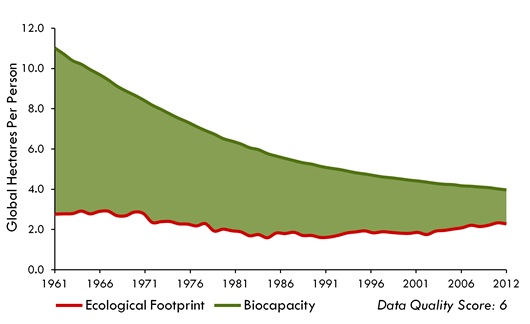 Peruvian ecological footprint, data from 1961 we see how the gap is shortened in time

Being close to the date of March 19 (Earth Hour) is an opportunity for a simple act from our home or where we are Let’s turn all the lights we can as an action against climate change, as many cities are doing Similarly.

If we continue in this viral excessive and irresponsible consumption of resources, at least we think we will have to live planet and it will be late in the galaxy …. this little blue dot called Earth is our only home. Within our wide variety of fruits we have in the country began to develop energy drinks, natural drinks, in a single line Light, Sugar sweetened with Stevia natural product, fruit pulp, filtered water and quinoa managing to obtain beverages with added value.

Camu Camu rich with vitamin C, Pineapple Quinoa and Quinoa Aguaymanto, drinks with high values in amino acids, minerals, manganese, magnesium, iron, zinc among others, ideal for celiacs, nutritious and a premium presentation quality they already know.
On every occasion you will enjoy these fruits now.